NEW YORK, Jan. 25, 2023 /PRNewswire/ -- Today, researchers at NYU Grossman School of Medicine, in partnership with the Robert Wood Johnson Foundation (RWJF), unveiled the Congressional District Health Dashboard (CDHD), a new online tool that provides critical health data for all 435 congressional districts and the District of Columbia. The dashboard incorporates 36 key measures of health, such as deaths from cardiovascular disease and breast cancer, along with conditions that affect health, like housing affordability and access to nutritious foods. Until now, most of these data were not available at the congressional district level, nor were they compiled in a single location or easily available to the public. 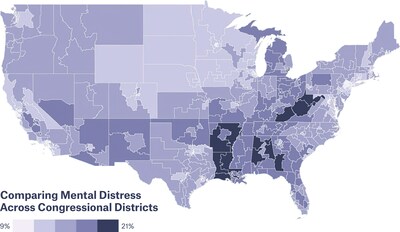 "The Congressional District Health Dashboard will help fill a critical need for timely, rigorous, and actionable data that can inform evidence-based policymaking," says Marc N. Gourevitch, MD, MPH, chair of the Department of Population Health at NYU Langone Health and the initiative's principal architect. "Now, policymakers, advocates, and others can drill down to their specific congressional districts to identify the opportunities and challenges affecting the health and wellbeing of all the people they serve, regardless of income, race, or zip code."

The CDHD's analysis of the congressional district data also reveals:

"This dashboard could be a game-changer for health policy in the United States. By using local data, members of Congress and their staff can make more informed decisions about policies affecting people's healthcare, communities, and workplaces," said Giridhar Mallya, MD, MSHP, senior policy officer at RWJF. "Our health shouldn't be determined by our congressional district, but these data clearly show how far we have to go to address persistent inequities across the country. Regardless of who they are or where they live, all people in the United States deserve the opportunity to thrive."

Overseen and regularly updated by a team of population health and policy experts, epidemiologists, and geospatial specialists, the Congressional District Health Dashboard website displays measures and drivers of health through interactive maps, tables, and charts. Data are drawn from federal sources and other datasets that adhere to rigorous standards of data collection and analysis, including the U.S. Census Bureau, the Centers for Disease Control and Prevention, and the Environmental Protection Agency.

About the Congressional District Health Dashboard

A first-of-its-kind tool, the Congressional District Health Dashboard equips congressional staff, federal and state advocates, journalists, researchers, and others with data on health and conditions that affect health in every congressional district across the country, fueling constituents' and policymakers' efforts to take action and drive change. With support from the Robert Wood Johnson Foundation, the CDHD builds on the foundation of the City Health Dashboard and responds to requests for additional unbiased health and wellbeing data at the congressional district level.

About the Robert Wood Johnson Foundation

The Robert Wood Johnson Foundation (RWJF) is committed to improving health and health equity in the United States. In partnership with others, we are working to develop a Culture of Health rooted in equity that provides every individual with a fair and just opportunity to thrive, no matter who they are, where they live, or how much money they have. For more information, visit www.rwjf.org.

The Department of Population Health at NYU Langone Health unites the fields of medicine and public health to improve the health of populations in New York City and around the globe, and to educate students to become leaders in healthcare delivery, health policy, and public health. Partnering with colleagues across diverse public, private and community organizations, the Department conducts basic and applied research to enhance the quality and effectiveness of healthcare and to advance community-level initiatives to improve health and health equity. Trained in diverse disciplines, the Department's more than 130 core faculty and 400 dedicated staff specialize in research areas including: healthcare delivery science, health economics and policy, epidemiology, biostatistics, medical ethics, early childhood development, community health and health equity, decision science, and tobacco, alcohol, and drug use prevention and treatment. Visit us at med.nyu.edu/pophealth.

For inquiries or corrections to Press Releases, please reach out to Cision.
✕
× Close Ad